Traditionally, in the Republic of Ireland (ROI), all patients are brought to the Emergency Department (ED) following an Emergency Medical Services (EMS) call, unless they decline to travel. The EMS call is activated by dialling 999/112. The increase in older people with complex multi-morbidity has been identified as a key driver to ED crowding. Older people are particularly vulnerable to adverse events associated with ED presentation, such as functional decline1, infections2, falls2, medication errors2, pressure ulcers2-4, and delirium2,5. Alternative care pathway models can improve outcomes for older people and reduce ED crowding.

Pathfinder is a collaborative project between the National Ambulance Service (NAS) and the Occupational Therapy and Physiotherapy Departments at Beaumont Hospital, North Dublin, ROI.  The service was first trialled in 2019 and subsequently received funding from the Government of ROI Slaintecare Integration Fund for a 12 month pilot in 2020 (Grant Agreement No. 392). The service aims to minimise unnecessary ED attendances for people greater than 65 years, through the utilisation of a range of alternative care pathways following an EMS call.

Once activated, the ‘Rapid Response Team’ conducts a comprehensive assessment in the older person’s own home and establishes whether a suitable alternative to the ED is available. Where deemed safe and appropriate, the older person remains at home, most commonly through the activation of one or more alternative care pathways (e.g. GP, Integrated Care Team, Primary Care Team, Community Intervention Team, Geriatric Day Hospital). Input from the Pathfinder ‘Follow-Up Team’ may also be instigated. This team can respond immediately to provide a short period of intensive intervention at home. This input typically lasts for a maximum of one week, with the aim of stabilising the situation and referring onwards to established community and voluntary agencies, if required, for longer-term intervention.

Pathfinder is the first model of this kind to be implemented and/or evaluated ROI. It has demonstrated that it is a safe alternative to ED conveyance for older people following low-acuity EMS calls. Access to a network of alternative care pathways and immediate follow-up by Physiotherapy and Occupational Therapy are two key enablers. The overwhelmingly positive feedback obtained confirms that this is a service model that older people and their carers want. It is a model which could be spread, with local adaptation, nationally and internationally. 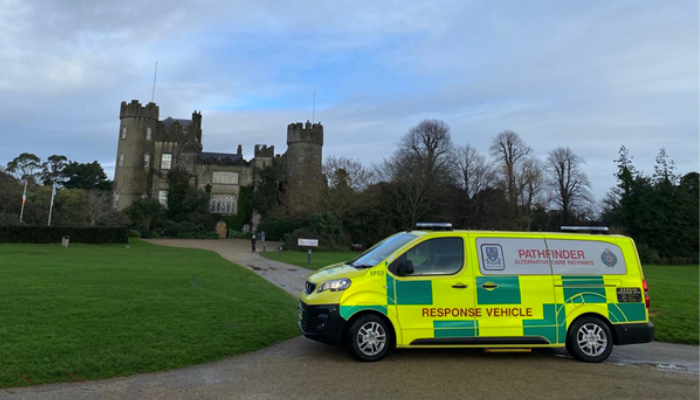