At the ACEM Annual Scientific Meeting in November 2019, Emergency Physicians from across Australia and New Zealand, and many other parts of the world, met at the front of the Royal Hobart Hospital to participate in a Climate Change march, which ended with the ACEM President, Dr John Bonning, calling for the declaration of a Climate Health Emergency. This was on the back of the conference theme, A Climate for Change, with many speakers and sessions addressing the health impacts of the changing climate, the role of doctors in advocacy for major public health issues (when climate change is the most significant public health issue the world faces) and what steps we need to take to be prepared for the damage a changing climate will bring to communities health care needs. Ironically, the bushfires which have ravaged many parts of the country, destroyed houses, communities, flora and fauna and polluted many, many parts of the world, had been burning for over a month at that point; who could really envisage what was to come? It was also notable that this day was the hottest day in November in Tasmania ever recorded…

Fast forward 6 weeks…devastating fires had gripped and ripped the country apart. I was at home, New Year’s Day, and received a call: “Can you go to Mallacoota?” I looked at my wife. She nodded. I packed my kit.

The next morning, I started the drive from Melbourne to Sale, a major regional city en-route to Gippsland, where bushfires had destroyed towns and forests, cut off communities, polluted the state and our New Zealand neighbours. I had been engaged in my role as a FEMO, A Field Emergency Medical Officer, to provide emergency level care to disaster areas. Mallacoota had been completely cut off by road, and it was estimated there where 4,000 or so people isolated in this beautiful part of the Australian coastline. We soon realised that flying in was impossible, so it was by boat; a police-launch and a 5-hour trip around the coast, arriving at midnight with an orange glow surrounding the harbour, menacingly letting us know that the fires where alive, active and aggressive.

My role was very much a support role. In bushfires, there aren’t a lot of medical casualties…people move, or people don’t survive. Australian authorities have learnt from previous bushfires; the notorious Black Saturday fires in 2009 saw 173 lives lost and the bushfire responses are very determined to see people move out early from danger zones. The impacts of this change have seen a much lower casualty level in this ongoing event even though the extent of these fires is much greater. So, my role provided emergency medical support for the 4,000 people in the community, working with the incredible local GP’s and the volunteers in the local clinic, and assisting with the triage of those people who needed to be evacuated out, by boat, plane or helicopter, for medical need. Equipment was sourced from the Navy and other providers to allow the set-up of a resus room at the local clinic, just in case, and the coordination of ongoing care of anyone critically unwell and evacuation plans if we needed to move a patient out by air or sea.

Other FACEM colleagues have been working across affected areas, in Navy and Army medical roles, as part of VMAT (Victorian Medical Assistance Team) and AUSMAT  (Australian Medical Assistance Team) responses, setting up field hospitals as needed to service communities who have lost local clinics and other medical supports, and providing relief staffing for those ED’s where extra supports are needed.

Fortunately, my EM skills were only needed on a small number of occasions. No lives were threatened acutely once the fires had passed. But, the ongoing impacts on this community and many others across the country, will not be known for weeks, months, years. The impacts of weeks of record levels of air pollution across the cities and towns, the mental health impacts, the decimation of communities, businesses and industries will not be known for years. We must support those impacted for years to come…we cannot forget.

While the role of Emergency Medicine in this incredible disaster was not one that tested our clinical skills, it will be one which will test our willingness to step up and demand that our political leaders stop bowing to the multi-nationals mining companies, the climate-denial media and billionaires with vested interests to maintain the status quo for their own gain and comfort; we need to represent and advocate for our patients, our communities and our future. This must not be allowed to happen again. Clinicians who understand science and their role as community leaders and advocates must work to ensure we face a future in which climate change, and the health impacts, are mitigated through policy change and political change. Our world needs a healthy future. As health care providers, we have a pivotal role in ensuring that happens. 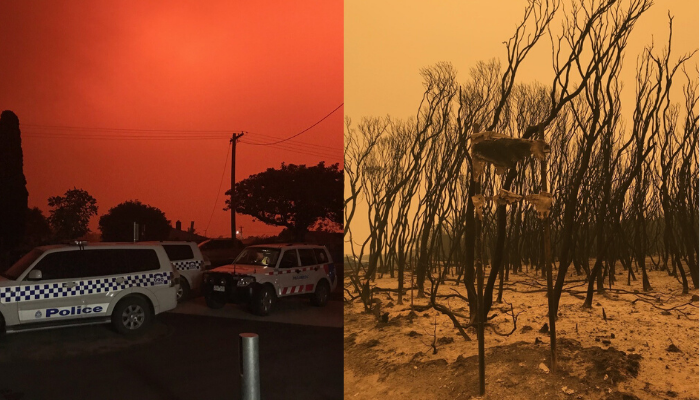